Build-to-rent surge will change apartment living for Australians, but for the better?

Home | Lifestyle | Build-to-rent surge will change apartment living for Australians, but for better or worse?
Lifestyle Australia’s emerging build-to-rent sector is growing — “booming” by some accounts with a 70% jump in value in the past year. Under this model, institutional investors develop purpose-built rental apartments to retain and operate under single ownership.

In Australia, it will change how apartments are designed and developed, how we are housed and how our tenancies are managed.

With 40 projects under way, an estimated 15,000 units worth more than A$10 billion are in the pipeline. Site availability has made Melbourne popular, with over 50% of the national market. Investors are active in Sydney, Perth and Queensland too.

Sought-after neighbourhoods are earmarked for large developments. Many have 300 or more units, most at market-rate rents.

Build-to-rent is new to our shores, but hardly uncharted territory abroad. In the UK, the sector expanded exponentially from 2013 with government support. It now accounts for one in five new homes built in England and one in four in London.

In the US, the built-to-rent sector is relatively mature. It makes up almost two-thirds of the rental stock in many of the largest cities. Heavyweight corporate landlords operate as many as 400,000 units each.

In Australia, we need more data and more informed public debate to guide tax, design, planning and tenancy reforms to secure the best possible urban and social outcomes from the build-to-rent expansion. 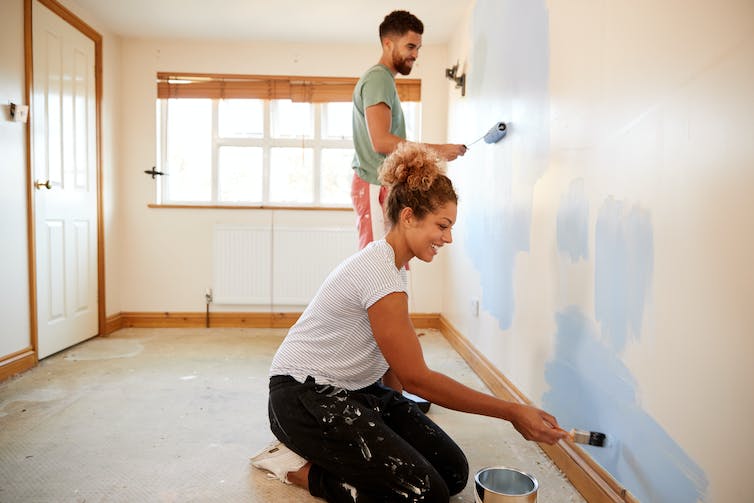 One of the appeals of built-to-rent apartments is they offer tenants more options to personalise their homes. Shutterstock

Proponents hail build-to-rent as a win-win. It’s seen as a salve for various housing woes, including concerns about housing supply, affordability, the private rental sector (including insecure tenancies and inexpert property and tenancy management) and apartment quality.

Since the COVID-19 downturn, the model has been hailed as an economic lifeline too: good for the construction sector, good for jobs.

Rise of a new asset class

Institutional investors’ entry into our rental sector contributes to a broader paradigm shift in urban housing systems dubbed the financialisation of (rental) housing.

Historically, small-portfolio “mum and dad” landlords have owned and managed our rental stock. They are motivated by many of the same benefits (such as tax concessions and capital gains) and exposed to the same risks as owner-occupiers.

So we’ve had a high degree of integration between the private rental and owner-occupier sectors: few dwellings were purpose-built for renting and most homes were readily interchangeable between sectors.

Build to rent disrupts this integration. It replaces the fragmented ownership of apartment buildings under strata title laws with a single institutional owner.

Build to rent also diverges from familiar speculative build-to-sell development geared towards short-term profits. Its longer-term investment horizons give developers a new incentive to minimise a building’s running costs and to create apartments that appeal to and retain tenants.

So will it deliver?

Will build to rent provide high-quality, high-amenity, professionally managed rental homes? And at what scale, for how long, and at what costs to whom?

In the longer term, will this model disrupt the socio-political twinning of home ownership and home?

Could build to rent be a catalyst for more progressive tenancy reforms, leading towards tenure neutrality/equality where ownership isn’t seen as automatically superior to renting?

These questions matter. One in three Australian households now rent their housing. Some argue we’re headed for a “post-ownership” society in which most people rent their homes.

Private rental was once a route to ownership. Now it’s a destination. Ownership has been delayed, become unattainable or been “traded off” for flexibility and being able to live in desirable locations.

Tenants are also more diverse. There are more lower-income and higher-income earners and more families than ever before.

Renters endure short leases on often poorly maintained properties owned by a cottage industry of “mum and dad” landlords. Social housing options are few and far between in a sector that has been marginalised and residualised. More renters, uncapped rents, weak tenant protections and stagnating wages make for a toxic mix of housing stress and financial risk.

Reasons to proceed with caution

We don’t have robust evidence to answer these questions, but limited evidence suggests caution is well advised.

In Australia, build-to-rent properties look set to attract rents of about 10-15% more than comparable non-BTR housing, just as they have in London. Without government subsidies, market-rate BTR will not provide more affordable housing.

Overseas, these rental premiums, alongside planning leniency (which reduced the affordable housing required of these developments), have been blamed for poor outcomes, such as residents being priced out of neighbourhoods they could once afford.

In New South Wales, BTR developments cannot be subdivided for 15 years (without clawback of land tax concessions). This ensures buildings remain in use as rental stock for that period. But what will happen after that?

Read more:
Build to rent could shake up real estate but won’t take off without major tax changes

Dealing with apartment defects: a how-to guide for strata owners and buyers

Explainer: the financialisation of housing and what can be done about it

Quality of life in high-density apartments varies. Here are 6 ways to improve it Outsourcing the complexities of strata