Wired and tired: why parents should take technology out of their kid’s bedroom

Home | Lifestyle | Wired and tired: why parents should take technology out of their kid’s bedroom
Lifestyle

Australian children are among the youngest users of the internet in the world, starting as young as eight years old.

Whether they’re using mobile phones, iPads or the TV, most children and teenagers will use their devices daily to chat to their friends or to access entertainment and education.

But when children use these devices in the evening, they can struggle to sleep, leaving them wired and tired.

They may also have difficulties with staying asleep if these devices disturb them throughout the night.

Why worry about missing a little sleep?

Research reveals that 20-40% of school-aged children are affected by inadequate sleep.

Inadequate sleep can be caused by not getting enough sleep each night, or by having sleep that is broken and disturbed.

While the amount of sleep needed varies between individuals, as a guide, primary school children should get between 10 and 12 hours of sleep each night, dropping to 8 to 10 hours for adolescents.

Poor sleep can have a negative impact on a child’s health and wellbeing, mood and behaviour, as well as their concentration and memory. This can lead to academic, social, emotional and behavioural problems at school and home.

If you think that your child is not getting enough sleep, look for signs such as moodiness, behaviour issues, poorer health and problems with memory and attention at home or school.

Children who are experiencing problems at school as a result of poor sleep may become anxious. This may then make it more difficult for them to get enough sleep each night.

Using digital devices before bed can affect sleep in a number of ways:

Over time, these may reset the child’s body clock so that it moves the sleep onset time to later in the evening. That leads to a sleep deficit and increases the likelihood of problems.

Take technology out of the bedroom 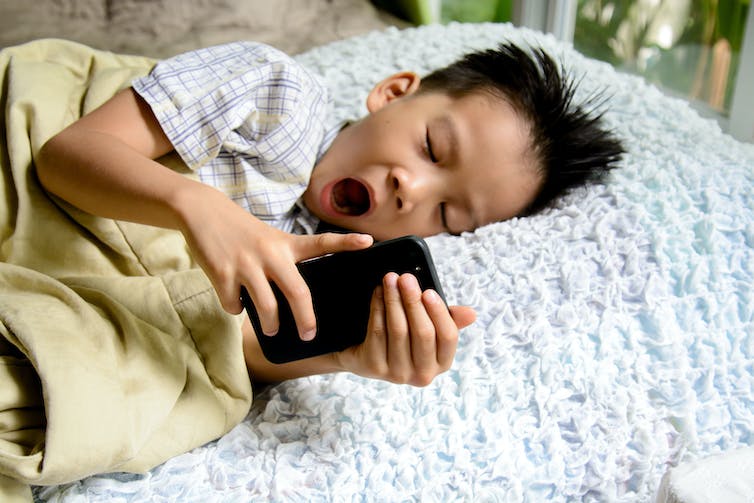 Setting a down time for technology is good for sleep routines.

Changing the sleeping environment by removing technology from the bedroom sets the scene for a good night’s sleep.

Establishing healthy bedtime routines and setting limits on the use of technology in the evenings can prevent the development of technology-induced sleep problems.

Things that can help include:

For older children, discuss the implications of the use of their devices with them.

Risks for pre- and early teens include bullying, device addiction and impact on their brain development.

While research on the impact of mobile devices and brain health remains inconclusive, the long-term effects of radio frequency waves and electromagnetic fields on the cognitive ability and the health of adolescent brains is under investigation.

Device addiction can be an issue as teenagers depend on their technology to stay connected to their friends – often only finding time to socialise late in the night. This can be due to an often hectic daytime schedule of school, work and sporting commitments.

Messaging friends, and sharing on social media, is often a source of sleep problems for this age group.

To avoid such problems, get them to help you develop the rules for the use of their devices, with an emphasis on balance rather than prohibition.

Given the increased importance for this age group of technology for socialising and learning, helping them find balance will not only help with sleep but ensure that their use of technology is a positive rather than negative influence. The problems with subletting 5 reasons why Zoom meetings are so exhausting